Liberty students were decked in their Liberty red and waving American flags for their annual tribute to those who lost their lives on Sept. 11, 2001. 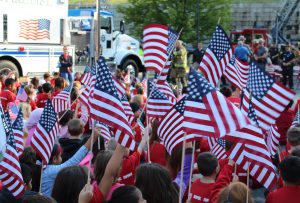 From the American flags on their school shirts to the 700 flags held by each student, Liberty Elementary School students and staff on Friday, Sept. 9, paid tribute to those who lost their lives on September 11, 2001, by honoring local law enforcement agencies, firefighters and EMTs who serve our communities today. Bob England, the school principal, reminded students that we are taught to evacuate or hide from a threat, while our first responders run to the danger to keep us safe. 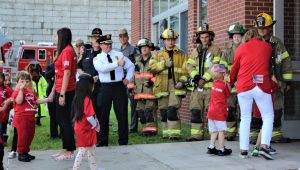 The school invited all past and present law enforcement officers, firefighters and EMTs to the September 11 Remembrance Ceremony to honor the past, present and future. Personnel from the Liberty Police Department, Sullivan County Sheriff’s Department, State Police, Liberty Fire Department, Swan Lake Fire Department, Loch Sheldrake Fire Department, Hatzallah EMS and others as well as many former first responders were honored in this solemn learning experience about service and community. Liberty Police Chief Steven D’Agata also spoke about how much police, fire and medical workers mean to the community. The school also honored two retired NYPD police officers who were at Ground Zero on that terrible day. 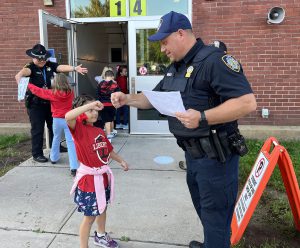 The event closed with students giving a thumbs-up on this day and anytime they see someone in uniform serving the community. Each guest was also given an American flag pin and a thank you card by the students.