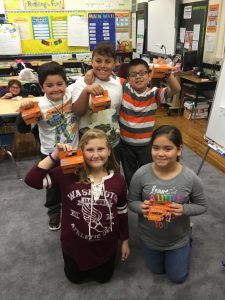 UNICEF is the United Nations Children’s Fund and was created in 1946 to help children in war-torn areas.

Proceeds from this year’s drive will go to areas devastated by recent disasters to help children there.

The trick-or-treating program began in 1950, according to unicefusa.org, and has raised more than $175 million.

UNICEF provided a packet with teaching materials and the orange boxes and students spent the entire month of October collecting donations.