The Liberty Central School District is hosting its first All Things Liberty Night and everyone is invited to join us at 6 p.m. Thursday, Nov. 7 in the High School Media Center.

We’re excited to share news about our students and staff and all the great new things happening in the elementary, middle and high schools.

The evening will include information about the “Three Frameworks” – Technology, Behavioral Supports, and Professional Learning Communities (PLCs) – which are the foundation of the district’s commitment to be the best teachers, administrators, mentors, and advocates to our students.

There will also be time to answer your questions about All Things Liberty.

Please RSVP on this form before Oct. 30 by writing your name and the amount of people attending.

We hope to see you there!

Congratulations to Owen Siegel and Liam Henry, who were named to the Section 9 Class B All-Star team. The team is voted on by the 12 MHAL and OCIAA Class B coaches. Only 15 players are chosen.

Owen Siegel was also named to the All-Section 9 team, which includes 22 players from Class AA, A, B, C, and D. Only five Class B players were picked for this team.

Congratulations to Owen for his accomplishments and positive representation of Liberty Soccer!

The Boys Varsity Soccer team defeated Ellenville 1-0 on Tuesday, Oct. 29 at home on a sloppy field. The team now advances to the Section 9 Class B semi-final game against Burke on Thursday, Oct 31 in Goshen.

Congratulations to the Boys Varsity Soccer team on their 1-0 quarterfinal
sectional win over Ellenville yesterday. Aimar Ramirez played exceptional defense throughout the game. The team worked hard to secure the win in sloppy field conditions, which made passing difficult and left many players sliding through the mud. Despite the difficulties, the team persevered, and their strong team effort prevailed.

The Boys Varsity Soccer team put up a valiant fight in their semi-final Class B loss to Burke. They left everything on the field and never stopped trying to
even the score until the final whistle blew.

The team had a great season, finishing with a 13-4 overall record. They
represented Liberty at the highest level and we are proud of them. They are
already looking forward to their potential next year as nearly the entire team will be returning!

Come one, come all to  see the Boys and Girls Varsity Soccer teams in their first round Section IX Class B playoff games at home.

The girls team is second seeded and will face seventh seeded Highland at 3:00 p.m. on Monday, October 28. The game will be played on the Liberty soccer field. Liberty plays in the OCIAA while Highland is a member of the MHAL. The winner of this game will earn a spot in the semifinals of the tournament.

The boys team is fourth seeded and will take on fifth seeded Ellenville at 3:00 p.m. on Tuesday, October 29. The game will be played on the Liberty soccer field. Liberty plays in the OCIAA while Ellenville is a member of the MHAL. The winner of this game will earn a spot in the semifinals of the tournament.

Wear red and white and come out to support both teams. Liberty Pride!

The Boys Varsity Soccer team finished their regular season game schedule with a resounding 7-0 victory over Chester. The entire team contributed to the win. The team finished the season with a 12-3 record and is eagerly awaiting their seeding information for sectional play which begins next week.

The New York Jets have announced that Joseph Franke of Liberty High
School in Liberty, NY has been named this week’s (week of 10/13/19) recipient of the New York Jets High School Coach of the Week award presented by Gatorade. Through Gatorade’s partnership, the monetary award to benefit the school’s football program has doubled to $2,000. Coach Franke will receive a Gatorade kit, containing a cooler, fuel bars, Gatorade powder mix, squeeze bottles and much more. Along with this award, Liberty High School receives an automatic bid to compete in the 2020 New York Jets 11-ON Tournament. In addition, he is invited to watch
the New York Jets play the Pittsburgh Steelers on Dec. 22 from a luxury suite at MetLife Stadium, where he will be presented with a certificate and an award ball.

In its 24th year, the Coach of the Week award is given to a coach in the Tri-State area who serves the best interests of the game through the teaching of sound football fundamentals, the motivation of young players to achieve and the promotion of youth football by way of dedication to their community, their school and their student-athletes.

Coach Franke is a graduate of Liberty High School. He played wide receiver and safety for the football team. After graduating in 2012, Franke attended SUNY Oneota. During his time at SUNY Oneota, Franke played shortstop for the baseball team. He began coaching high school football after graduating college in 2016. Franke was named the head coach of his alma mater, Liberty High School in 2018. In addition to his coaching duties, Franke serves as a 5th grade mathematics and science teacher for Liberty Middle School.

Football: Currently 1-1 in the league with a 4-2 record overall. Currently 3rd in the division.

Girls Soccer: Currently 5-1 in the league with a 10-1-1 overall record. Was ranked as high at 19th in the state for class “B” schools (Rankings come out on Tuesday night). Battling for the top spot in the division and a home sectional playoff berth.

Boys Soccer: Currently 3-3 in the league with an 8-3 overall record. Competing for the top spots in the division along with a sectional playoff berth.

Girls Volleyball: 0-7 in the league and 2-8 overall record.

Congratulations to the Boys Varsity Soccer team on their 7-2 Spirit Week/Senior Game win over Sullivan West. The team came out strong and never let up. The win was a total team effort.

Congratulations to the Boys Varsity Soccer team on their 6-0 win over Chapel Field on a very windy Thursday. The team controlled both sides of the ball well in the win.

Congratulations to the Boys Varsity Soccer team on their convincing 4-1 victory over league rival Fallsburg on a cold, blustery Friday afternoon on our home field. Our offense pressured Fallsburg throughout the game forcing their keeper to make over a dozen stops.

Fallsburg kept our defense of Aimar Ramirez, Wilson Gomez, Jose Barragan, and Michael Cuellar busy all day with their fast counter attack though the team provided strong pressure refusing to let them through. Eduardo Romero was exceptional in goal.

Congratulations to the Boys Varsity Soccer team on their exciting and pivotal division win over a strong Burke team at home yesterday under extremely difficult conditions.

The team went up first with a goal from Liam Henry assisted by Owen Siegel and never fell behind in the 3-2 win. Michael Cuellar scored next and Liam added a second goal to seal the win. Eduardo Romero did an amazing job in goal with 12 total saves, including back to back rebound saves twice in the game. Rudolfo Espinoza had 2 saves in goal when Eduardo was out briefly following a particularly difficult series. The defense did an excellent job in the win. The team is playing quality soccer at an important point in the year.

Eduardo Romero, Rodolfo and John Nolan all shared time in goal.
The win was team effort. 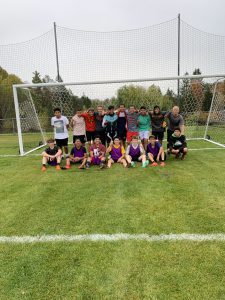 The Boys Varsity Soccer team practiced on the Liberty HS soccer field on Monday and became the first team to play on the newly redone in over three years. The team exhibited “Liberty Pride! by christening the field with a win!

In addition to the goals and assists listed above, Aimar Ramirez and Jose Barragan anchored a strong defense.