The junior has been given the prestigious honor as 2018-19 National Hispanic Scholar for his excellence in academic achievement and superior college entrance exams.

Ben was among 5,000 academically outstanding students from more than 250,000 Hispanic or Latino juniors who took the Preliminary SAT/National Merit Scholarship Qualifying Test (PSAT/NMSQT) and identified themselves as Hispanic or Latino. To be eligible, students must be at least one-quarter Hispanic or Latino, achieve a minimum PSAT/ NMSQT score for their region and have a cumulative junior grade point average of 3.5 or higher to be designated as scholars. The HSRP honors these outstanding students and makes their information available to subscribing colleges and universities.

Liberty would like to congratulate Ben who continues to demonstrate academic excellence. Ben expressed his excitement about the recognition and acknowledged how perseverance during the day-to-day is what led him to his PSAT success.

“I’ve made it a point to study hard throughout the year,” he said. “To study hard and study better while paying special care to slowing down to better retain information.”

Modest as ever, Ben noted that he considers himself to be a strong test taker.

“It is an advantage,” he said. “I missed a few questions at the start of the test but I didn’t let that bother me and eventually I got into a rhythm.”

Ben also attributed some of his success to his teacher, Ms. Caro.

“She let her students know what to expect and that really helped” he said. “It’s a fast-paced test and it’s important to be aware of that to avoid feeling anxious.”

Ben said that he encourages sophomores to take the test to prepare for the fast paced environment.

“I’d tell [sophomores] to take the test, not worry about specific problems, and go back to it later if there is time,” he said. “Just let go of your anxiety and get the test done.”

Ben, who is also a member of the Liberty High School’s debate team, is planning to attend a university in Upstate New York to study something in the STEM field. Although he does not know what his specific concentration will be, he said he loves math and science and is certain that a STEM related profession is in his future.

Taking the PSAT/NMSQT test allows sophomores and juniors to see where they rank academically in comparison to students all over the state and country. For some who achieve national standing, it is a good time to make selections of colleges or universities as being a National Hispanic Scholar opens the door to many opportunities. 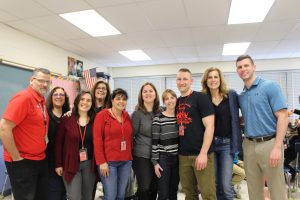 Mr. Chewens, a Lieutenant in the Army, will soon deploy to the Middle East what he’s anticipating will be a 14-month tour.

Fifth-grade students, teachers and guidance staff threw Mr. Chewens a surprise send-off which included a surprise visit from his parents.

Surrounded by his parents, colleagues, friends and students, Mr. Chewens was presented with an Army Build-A-Bear that will keep him company on his travels . 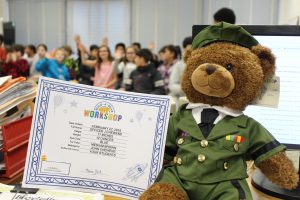 Liberty Elementary School teachers and staff treated students to a reading inspired flash mob to spark excitement for Read Across America Month and to remind them about the joys and adventures that a great book can bring.

Assistant Principal Mr. Robert England triggered the celebration, launching into the choreography of “Gotta Keep Reading,” a parody song of “I Gotta Feeling” by The Black Eyed Peas. One by one, teachers joined in, dancing with their favorite children’s books and encouraging students to clap along.

Following the dance, Interim Superintendent of Schools Carol Napolitano led the students in the Reading Pledge, a promise to love reading for the rest of their lives.

A group of students at Liberty Elementary School had a special visitor on March 1 when Assemblywoman Aileen Gunther visited Mrs. Jill Wiener’s classroom to read to students as part of the “Read Across America” campaign.Every year, the school takes part in “Read Across America” by hosting assemblies, special guest readers and other events. The nationwide initiative coinciding with the birthday of beloved children’s author Dr. Seuss, encourages reading out loud and celebrates the lifelong joys and benefits of reading.